Last November, Kerser released his seventh studio album, Engraved In The Game, and now, the Western Sydney mainstay is taking the new record on tour.

We were lucky enough to chat to the eccentric emcee about the new album, the upcoming tour, his musical process and more.

Engraved In The Game was an album that achieved great success without any commercial radio or media support, once again, to which Kerser credits his the work-rate of himself and his team.

“It feels good [to find success]. I have a hard-working team around me, and I myself work non-stop, so it’s like a reward,” he says.

The success of the new project is nothing unfamiliar, however, as the Australian Hip-Hop veteran has now dropped seven full-length albums inside the last seven years.

“I am always hanging to write down music,” said Kerser on what inspires and drives him to release so much music.

“Whenever I hear a good beat, or song, or anything musically sick, I instantly think about what I’m doing with my music at the moment, and then continue working on the next song or start on a new one.”

And while the drive to make music hasn’t slowed in those last seven years, neither has the development of his sound.

“I feel it’s matured a lot. I love how my music has aged though. If you play any random song of an album of mine, you can’t say, ‘that sounds like 2011.’ It’s all still so modern.”

One aspect that has kept Kerser’s sound and vibe unique throughout the years, has been his particular use of producers. The Campbelltown rapper only works with a single producer per album, and this time around, he worked exclusively with German beat maker Allrounda.

“I feel I capture a vibe with the one producer and we attack the project as a team. I feel that really gives it an album feel instead of getting a few beats here and a few beats there.”

Overall, the ABK Records spearhead believes that it’s his “longevity, consistency, hard work and passion” that has helped him have such a successful and sustainable career, as well as “a loyal fan base. [That] helps a lot, too.”

Now, Kerser is taking Engraved In The Game across the country with a mass of special guests throughout April and May.

On what to expect from the tour, Kerser says fans should be ready for “a crazy hyped set with songs they have not heard live before and probably [the] best atmosphere you can catch at a show.”

You can find the Engraved In The Game tour dates below 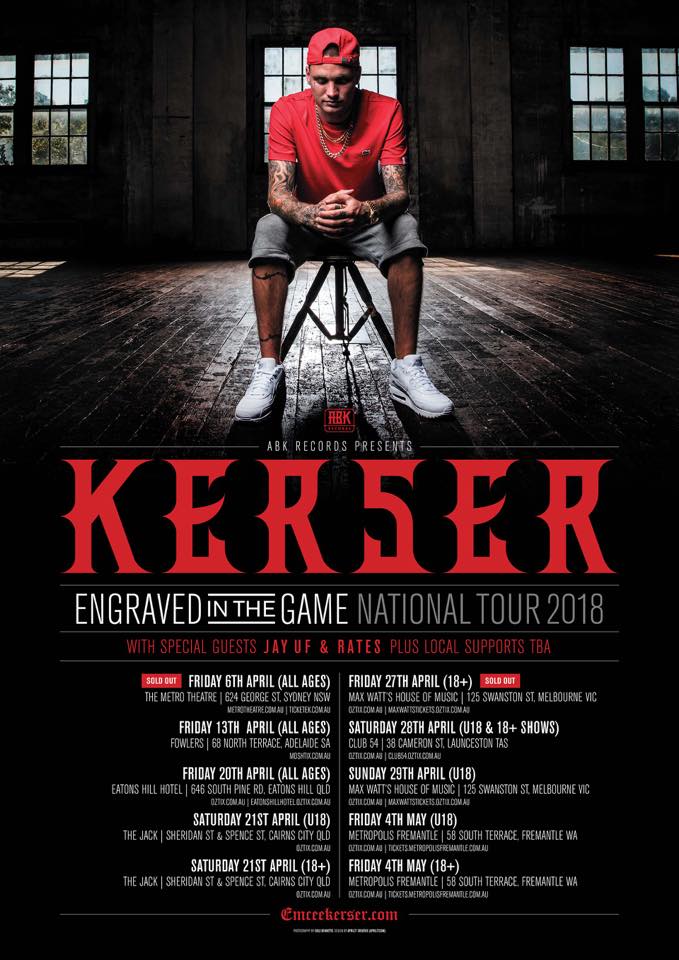